Chronic pain is highly prevalent among U.S. adults, and millions use long-term opioid therapy to treat their pain.

In light of increasing scrutiny surrounding the safety of long-term opioid use for chronic non-cancer pain, many clinicians are now trying to work with patients to taper their opioid doses, sometimes aiming to achieve much lower dosages, and in some cases to stop taking opioids altogether.

But research around best practices for opioid tapering is limited.

The CDC 2016 guideline for prescribing opioids for chronic pain brought some attention to the tapering topic, but the CDC recently clarified its recommendations, believing that in some instances the original guidelines had been misinterpreted, leading to harm for individual patients.

A team from University of California, Davis, working in conjunction with OptumLabs, wanted to attack some key questions related to dose-tapering practices:

Aim 1 of the project set out to examine trends in the rate and rapidity of tapering, and examine if tapering has been consistent with the CDC’s original 2016 guideline.

The study team analyzed data from more than 100,000 adults over the 2008–2017 period who were prescribed long-term opioids and were taking higher doses (≥50 morphine milligram equivalents ([MME]/day).

Women were 13% more likely to undergo tapering. The likelihood of dose tapering was significantly higher among patients prescribed higher daily doses at baseline. 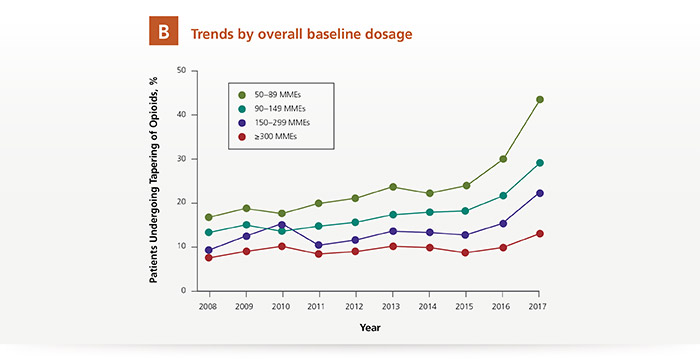 The study team defined rapid tapering as tapering at a dose reduction rate exceeding 10% per week (40% per month), as recommended in the CDC guidelines.

These results were published in JAMA Network Open. The next step is for the team to look at clinical outcomes associated with tapering and among patients tapered at more and less rapid rates.

Future work by this team will assess how frequently tapering efforts achieve stable lower doses of opioids, as well as patient-level predictors of successful tapering, and investigate short- and longer-term clinical benefits and harms of opioid tapering.

By better understanding the benefits and harms associated with various approaches to tapering, this project has the potential to improve the specificity of guidelines for providers, and to improve the quality and safety of care for patients prescribed long-term opioids.